Entangling atoms over a large distance

The starting point are two independent atomic traps in two laboratories separated by 400 meters. For entangling the atoms we employ the “entanglement swapping” protocol. Therefore, we first entangle each atom with a photon. The photons are overlapped on a fiber beam splitter where two-photon interference allows projecting them onto maximally entangled Bell states. Thus, coincident detection of the two photons signals (“heralds”) that an entangled state of the two atoms was created. In order to achieve a high degree of interference the photons must be matched in all degrees of freedom (except polarization, where the quantum state is encoded). This requires precise synchronization of the atomic excitation and a high degree of control of the experimental parameters.

Schematic of the setup of two independent atomic traps. In each trap the atom is entangled with a photon, these photons are overlapped on a fiber beam-splitter. Coincident detection of two photons in certain combinations of avalanche photodetectors (APDs) signals successful creation of an entangled state of two atoms. This scheme allows preparing two different atomic states according to the outcome of the measurement on the photons. 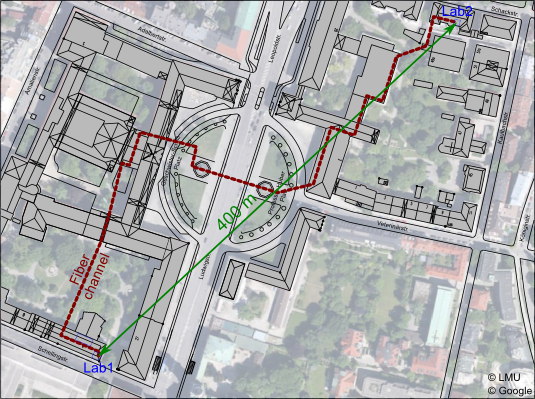 Top view of the experimental setting. The two laboratories (Lab1 and Lab2) are located in separate buildings of the physics department and the department of economics of Ludwig-Maximilians-University.

Recently, we have established entanglement over 400 m and, by the virtue of ultrafast detection of the atomic state, were able to close the locality loophole and the detection loophole in a single test of Bell's inequality. 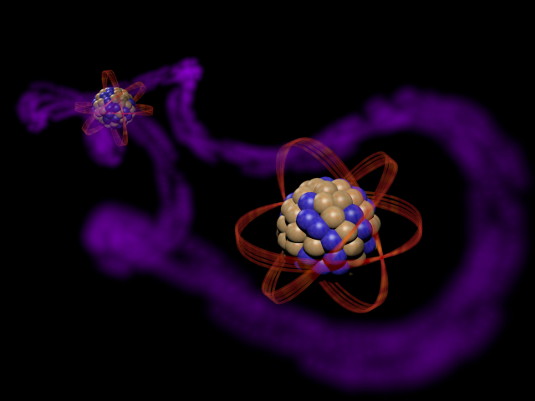