Quantum effects like superposition and entanglement usually appear at smallest scales in the microcosm and  contradict our everyday experience. However, observing these effects is experimentally challenging and usually restricted to simple microscopic objects like atoms and small organic molecules in a well-isolated environment.

Our group now pursues a completely different path. Instead of trying to isolate a single quantum system and to preserve its quantum properties, a macroscopic quantum object is “constructed” from two microscopic ones which are widely separated. Utilizing special techniques from quantum teleportation it is possible to generate quantum entanglement even at large distances. 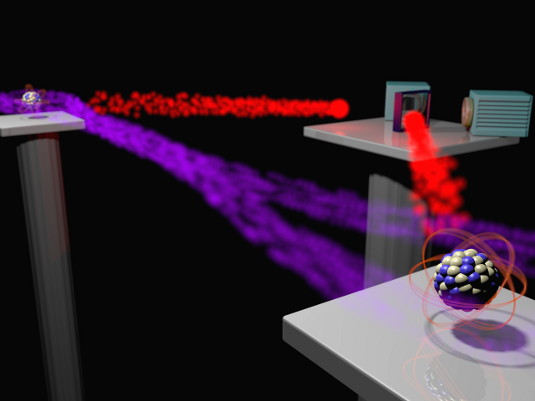 Artist's view of the experiment. Two atoms at different locations are excited to emit a single photon. The photons are brought to interference on a beam splitter and then detected. This detection connects initially independent atoms to a macroscopic quantum system.

In our case the object consists of two single atoms which are independently trapped in two laboratories 20 meters apart. The atoms are excited via short optical laser pulses thereby emitting single photons. These photons are then brought together via optical fibers at an intermediate location and interfere on a beam splitter.  The two-fold detection of the photons behind the beam splitter then projects the atoms onto an entangled state.

One important property of this method is, that the registration of the two photons reports (heralds) the successful entanglement preparation to the experimenter. Therefore it is not necessary to verify the result at every attempt as such verification destroys the quantum state. This new quantum system opens up perspectives for future quantum-communication applications as well as important tests on the foundations of quantum physics.