Private communication over public infrastructure is of great importance in everyday life. The currently used methods to keep our communications secure, however, are at risk by quantum-based attacks and implementation vulnerabilities. To overcome these issues, device-independent quantum key distribution (DIQKD) was introduced - enabling for the generation of provably secure keys between two parties over an untrusted channel, even while using uncharacterized and potentially untrusted devices.

Our group recently demonstrated the first DIQKD system. For this, we used a quantum network link formed by two entangled rubidium atoms independently trapped in laboratories at opposing sides of LMU campus. By achieving high-quality entanglement between the atoms and implementing a new communication protocol introduced by our collaborators of the National University of Singapore, we realised positive asymptotic key rates between the laboratories in a fully device-independent setting. 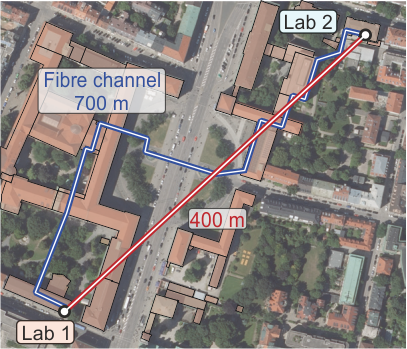 Map of the LMU campus indicating the locations of the laboratories. The atoms trapped in Lab 1 and 2 are entangled by the exchange of single photons via the 700 m fibre channel. Map data provided by © Bayerische Vermessungsverwaltung.