Quantum eavesdropping without interception: an attack exploiting the dead time of single-photon detectors

Although Quantum Key Distribution (QKD, also known as Quantum Cryptography) still is perfectly secure in theory, more and more flaws in the specific implementation of QKD systems have been identified. Our group has now demonstrated an especially simple attack on our own QKD setup without having to measure the exchanged photons at all. By introducing some well-timed, dim light pulses into the receiver's detectors the eavesdropper can selectively blind them and hence control which one will be active. In the experiment, more than 98% of the key (see figure) could be reconstructed without tripping off any alarms.

Fortunately, a possible countermeasure is evenly simple: By checking whether all single photon detectors are active during a detection event, this and similar attacks are rendered ineffective. 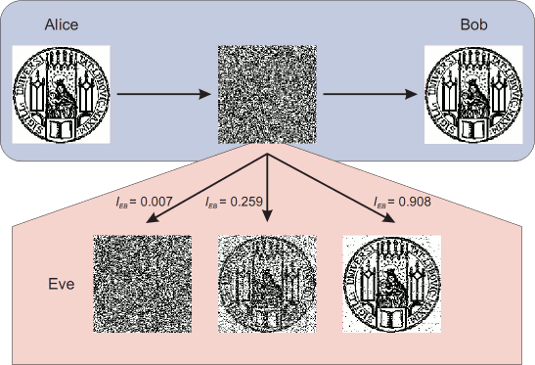 By selectively "blinding" the detectors at Bob's side, an eavesdropper Eve can partially guess the key distributed between Alice and Bob. Shown are pictures decrypted by Eve, depending on the intensity of the "blinding" pulses. The amount of information obtained by Eve (IEB) can achieve very high values.